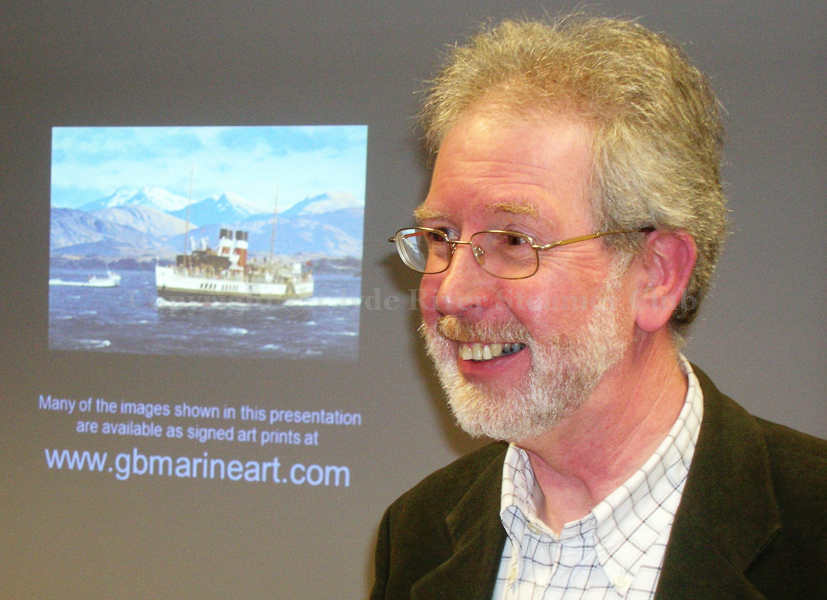 Gordon Bauwens
The title of the December 2013 talk at Jurys Inn, Glasgow, was ‘Ships in the Blood: the Maritime Art of Gordon Bauwens’. Compared with some other midwinter meetings in the CRSC’s recent history, this one was extremely well attended. Everyone was enthralled by Gordon’s story of how he became an artist, what motivated and inspired him, and why he had chosen the various subjects of his paintings.
For a Club accustomed to being regaled with photographs of old and modern ships, it was refreshing to behold a series of beautifully imagined paintings, the accuracy and meticulousness of which are recognised internationally. But what distinguishes Gordon Bauwen’s maritime art is his ability to capture not just the detail but the character of the ships he portrays. It is a quality that cannot be pinned down in words but strikes to the heart of anyone with a love of ships and the sea. His is a talent borne of a lifelong interest in ships, as he made clear in his talk. He said he was often asked why he painted ships. “You paint what interests and excites you. If you’re not, why expect anyone else to be?” 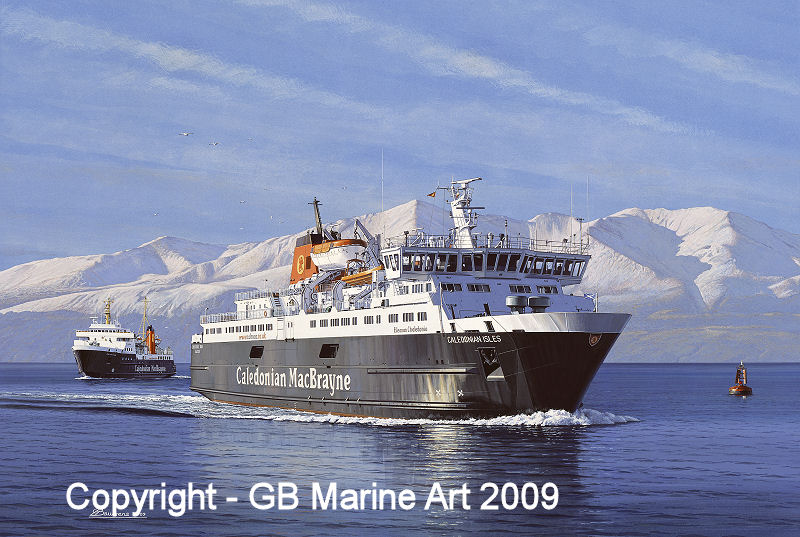 ‘Winter Rendezvous’
Born in Glasgow in 1951 and now resident in Killearn, Gordon has specialised in painting the great liners — mostly Cunarders — of the 20th and 21st centuries. But he has also painted Waverley and CalMac ferries, including ‘Winter Rendezvous’, an evocative scene off Ardrossan, capturing the changeover of Caledonian Isles and Isle of Arran on the Brodick run. 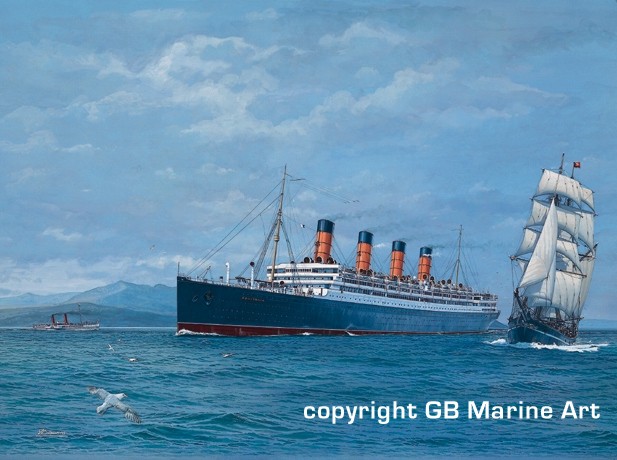 ‘   — The Ship Beautiful’
One of the most delightful aspects of Gordon’s work is the way he sometimes incorporates a Clyde steamer into a painting of a great liner. ‘Aquitania — The Ship Beautiful’, for example, shows the four-funnelled Cunarder passing Arran on trials in 1914, with the Glasgow and South Western Railway’s flier Glen Sannox in the background.
Another such portrait, and one of Gordon’s best-known paintings, is ‘Memories of an Empress’, showing the Canadian Pacific liner Empress of Britain at the Tail of the Bank in 1960, with Queen Mary II passing behind. An important ingredient of a Gordon Bauwens painting is the scenery. “There’s a feeling you get inside when you see a beautiful ship in a lovely setting. That’s what I try to create,” he said. His illustration of ‘RMS Queen Mary — Maritime Masterpiece’ proved those were no empty words. 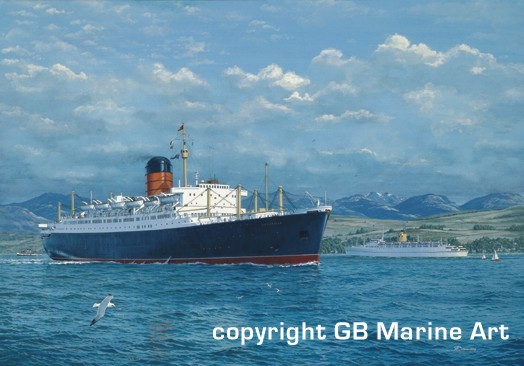 ‘River Portraits’
Characterising liners as “a technical miracle” and “a fascinating microcosm of life”, he gave a brief résumé of the history of the Clyde shipbuilding industry, the greatness of which he had witnessed as a boy. “I inherited a strong sense of pride in my local environment”, he said, recounting childhood trips ‘doon the watter’ and the sight of Sylvania at Clydebank in 1957, which kindled a lifelong passion for Cunard colours (‘River Portraits’). It was a world of “vast funnels that towered above like skyscrapers, of noises echoing through steel plates”.
All these influences filtered through to his artwork at school. Painting a dockside scene from memory, he won a gold medal in the Glasgow Corporation schools art competition. Witnessing the launch of Queen Elizabeth 2 in 1967, he made a vow that “one day I would walk on those decks”.
His progress at the Glasgow School of Art was brought to an abrupt halt by the theft of most of his first year’s work while he was travelling home on a packed bus one evening. Bizarrely, this led to the College management disbarring him from continuing his studies. Gordon put the setback to good purpose, working initially as a technical illustrator for the Yarrow Admiralty Research Department, then as an educational graphic designer for Strathclyde Regional Council. 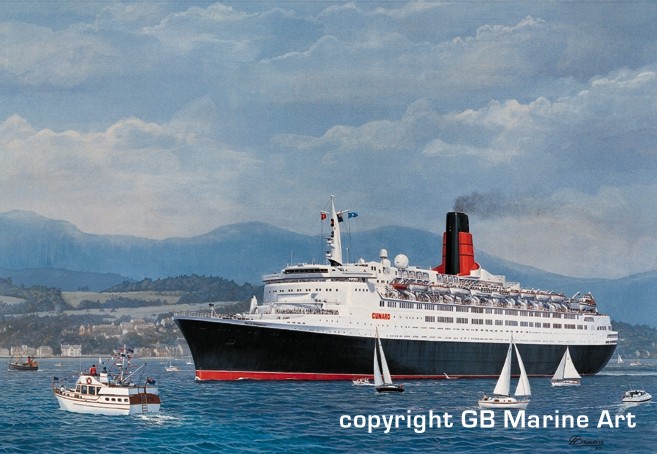 ‘Welcome Home QE2’
The seeds of his career as a professional maritime artist were sown in 1990, when QE2 returned to the Clyde for the first time since her launch. He persuaded a Glasgow gallery to sell prints of a painting he had made of the great ship (‘Welcome Home QE2’), and ended up selling the original to Sir Eric Parker, chairman of Cunard. After initially continuing to sell prints on a spare-time basis, with an increasingly international clientele, Gordon set up his own full-time business, GB Marine Art, in 1997.
Among notable paintings from this period were ‘QE2 — Transatlantic Arrival’, his late 1990s view of the liner arriving in Manhattan against a backdrop of the Twin Towers; ‘Cunard Queens’, showing QE2 and the new Queen Mary 2 in April 2004 at the start of their unique tandem transatlantic sailing from New York; and ‘RMS Queen Mary — The Legend Begins’, an evocation of the three-funnelled Cunarder leaving Clydebank in 1936, which Gordon presented to Dr John Brown, veteran designer of the two 1930s Queens. Gordon subsequently inherited the set-square used by Dr Brown while designing the Queens.
In 2002, Gordon’s dream came true: he and his family undertook a transatlantic crossing on QE2. After the ship’s last visit to the Clyde in October 2008, he received a new Cunard commission for what turned out to be his largest-ever ship portrait: an oil painting, measuring 60×40 ins, of QE2 during her final Clyde visit.  “Queen Elizabeth 2 – Clyde Farewell” hangs at the top of forward stairway ‘A’, opposite the QE2-themed Yacht Club aboard the latest Queen Elizabeth. Gordon sees his paintings as his “tribute to the skills and pride of generations of marine engineers, naval architects and shipbuilders, who gave the world so many elegant ships”. 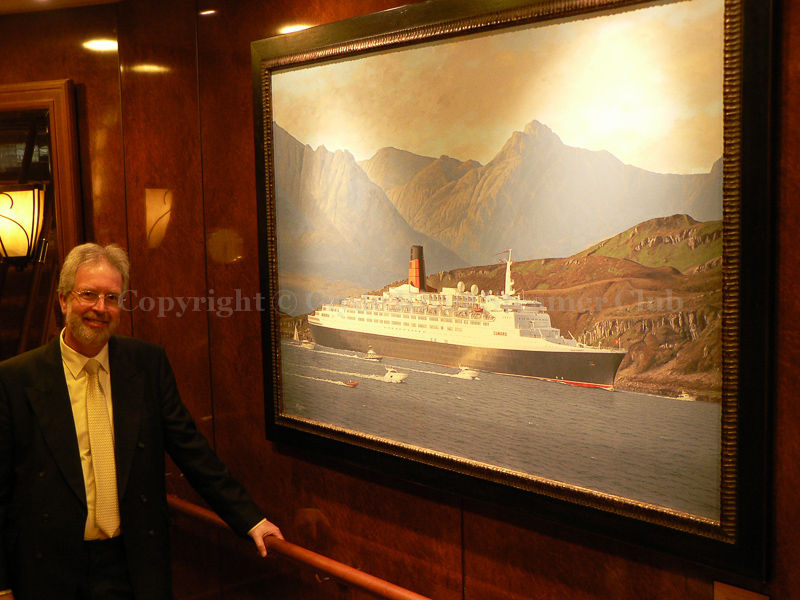 Gordon Bauwens at the top of forward stairway ‘A’ of the new Queen Elizabeth,
next to his largest ever painting, “Queen Elizabeth 2 ~ Clyde Farewell”

The meeting, chaired by CRSC president Derek Docherty, ended with a vote of thanks by Nick Wober, who praised the subtlety of Gordon’s work and his flawless portrayal of much loved ships.
A selection of Gordon Bauwen’s paintings can viewed on his website: www.gbmarineart.com
Gordon very kindly allowed us to use some of the images from his talk in this report.
Details of all Club meetings can be found on the Club Syllabus
We use cookies on our site to improve your experience. By continuing to browse the site, you are agreeing to our use of cookies. Accept Read More
Privacy & Cookies Policy